Implement Domain Name System Security Extensions (DNSSEC) with Strong Cryptographic Algorithms for each zone and subsequent sub-zone for domains that resolve in the DNS.

The original design of the DNS was almost completely focused on data availability and did not include a security component. Fundamentally, DNSSEC solves two crucial problems related to the DNS:

Adds a data integrity check to the DNS; and

Adds the capability to authenticate the trust chain of data provided by the DNS.

DNSSEC is a backward-compatible technology that extends the DNS by providing origin authentication of DNS data, data integrity and, where needed, authenticated denial of existence of domain name and resource records.

It is important to understand that DNSSEC does not solve every security problem related to the DNS. DNSSEC does not provide confidentiality of DNS responses or communications between DNS clients and servers. It also does not prevent attacks on DNS servers using other parts of the network stack—for instance, implementation of DNSSEC does not protect against Distributed Denial of Service (DDoS) attacks. As any organization may be targeted by malicious actors using a DDoS attack, it is advisable that their security plan, and that of their DNS provider, include a DDoS mitigation plan. Despite some of the drawbacks, DNSSEC ensures users are not hijacked en route to their intended destination and thereby builds trust and confidence to users conducting online activities.

What is the fTLD Domain Security Requirement for DNSSEC?

DNSSEC with strong cryptographic algorithms must be deployed at each zone and subsequent
sub-zones for domains that resolve in the DNS.

How Does DNSSEC Work?

DNSSEC uses public key cryptography to authenticate domain names and verify the integrity of traffic to and from those names. The internet relies on the ability of people and computers interacting at a distance. A customer may not have ever seen or met the principals of an internet business, but they still have to be able to exchange information with them. How does that customer know that the information sent from the business is legitimate and not an imposter?

In the real world there are many physical clues and cues that guide the application of trust to transactions, however most of these are simply not available on the internet.

One of the keys to building private and reliable communications between people, businesses and organizations on the internet is to use cryptography. Many types of cryptography are in use in the public internet, but DNSSEC uses a very specific type: public key cryptography.

DNSSEC allows a user to make a traditional query about an address and by using a combination of typical DNS queries and the addition of verifiable trust, ensure that the server answering the query is authoritative and the response to the query has not been tampered with during transmission. This is illustrated below for www.example.bank. 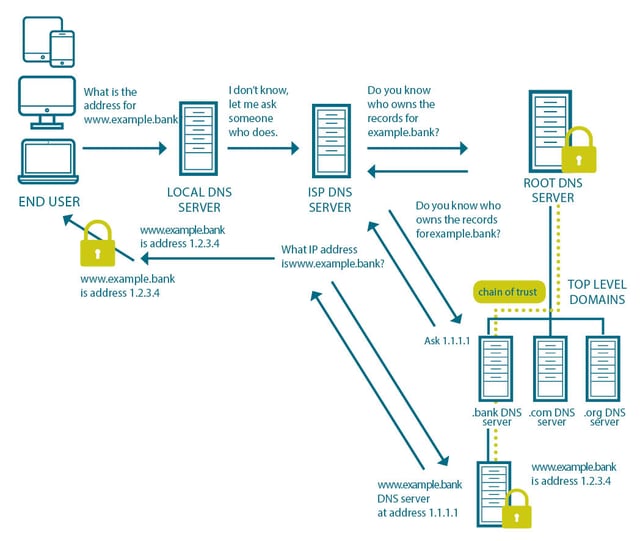 Public key cryptography is a secure, easy-to-deploy method for ensuring that messages and transactions can be changed into a form that can only be read by the intended recipient.

Public key cryptography has wide use in technologies such as Secure Sockets Layer (SSL), Transport Layer Security (TLS), Pretty Good Privacy (PGP) and Virtual Private Networks (VPNs) as a strategy for protecting messages on the internet.

One of the features of public key cryptography that is of special importance is digital signatures. Simply put, if a private key is used to generate a signature of a document or encrypt a message, the recipient can verify that it is legitimate by verifying the signature against the public key of the sender. As with protecting the confidentiality of messages, the digital signature relies on the essential property of the key pair; messages signed with the private key can only be verified using the matching public key and vice versa.

AUTHENTICATION—Digital signatures are regularly used to authenticate the true source of messages. When a private key is used to sign a message, a valid signature indicates that the message was sent by the holder of the private key, and this ensures sender authenticity.

NON-REPUDIATION—If a sender has signed some information, they cannot, at a later time, deny having signed it. Similarly, that someone has access to a public key of another does enable them to use that public key to forge a valid signature.

DNSSEC makes essential use of the first two of these properties of digital signatures. The fundamental feature that DNSSEC provides is to guarantee that the answer received as a result of a DNS query is exactly the answer that corresponds to the authoritative state of the DNS records related to that query.

DNSSEC is an extension to the DNS and it adds records to the DNS that can be used by DNS clients to validate the authenticity and integrity of an answer to a DNS query. Where a DNS server must indicate that it has no records with which to respond to a query, DNSSEC provides a way for this “negative answer” to be authenticated as well. To accomplish this DNSSEC adds a set of new DNS resource records:

Every zone file that is secured by DNSSEC has a public and private key pair. The administrator of the zone is responsible for keeping the private key secret. However, in order to check the signature on the zone data, DNS clients must be able to get a copy of the matching public key. As a result, the public key is published in the DNS using DNSSEC’s DNSKEY resource record. Here is an example of a DNSKEY record:

The Time-to-Live (TTL) value is one day (86,400 seconds). TTL is a value that controls how long any name server may cache the information that it may acquire in a query. The Flags value is 256, indicating that this is a Zone Key. The protocol value is a constant number: 3. The field that follows is the identifier for the public key algorithm, and the value 8 indicates RSA/SHA-256. The RR value is simply the encoding of the public key that the DNS client will use to validate the signed zone.

A Resource Record Set is a collection of resource records in a DNS Zone file that have a common name, class and type. In practice this means there would be a resource record set associated with each part of a DNS query response. Another way to say this is that the RRSIG is the Zone Administrator’s private key applied to the part of the zone requested by the client: a digital signature for the Resource Record Set.

In a typical zone with SOA (Start of Authority), NS (Name Server), A, MX (Mail Exchanger) and DNSKEY (Domain Name System KEY) resource records there would be five separate Resource Record Sets, each with a separate RRSIG record. Here is an example of a RRSIG record:

The DNSKEY and the RRSIG can be used to check the authenticity and the integrity of a DNS response, but only when there is a response. There needs to be a way to check the authenticity and integrity of a response when the DNS server is unable to find a result for the DNS query. The DNS doesn’t have a built-in resource record for this, so one was invented called the NSEC record.

As before, the first four fields specify the name, TTL, Class and resource record type (this time, NSEC). This record then indicates that the next name, in sorted order, after “alfa.example.bank” in the zone is “host.example.bank.” The codes “A” “MX” “RRSIG” “NSEC” and “TYPE1234” indicate that there are “A” “MX” “RRSIG” “NSEC” and “TYPE1234” resource records associated with the name
alfa.example.bank. One implication of this is that, by collecting the information from the NSEC records, the entire contents of the DNS zone can be enumerated.

Here is an example of a DS record for the zone example.bank:

As always, the first four fields are the name, TTL, Class, and resource record type (this time, the DS record). 60485 is the key tag for the corresponding “dnskey.example.bank” DNSKEY resource record. The number “8” indicates the algorithm used by “dnskey.example.bank” to construct the DNSKEY resource record. The value “1” indicates the algorithm used to construct the digest and the remainder of the record is the digest of the DNSKEY in hexadecimal format.

In essence, DNSSEC simply adds additional data to the responses that allow the DNS client to authenticate the resource records returned by the server.

If the client requests the security information:

If the string and resource record type being queried exist, the authoritative name server simply adds the RRSIG to the response;

If the string or the resource record being queried is not in the zone, the authoritative name server instead returns the NSEC record and its accompanying RRSIG record to indicate the negative response.

The DNS client can always take the returned RRSIG data and calculate its own copy of the signature to see if they match. The DNSKEY is needed to do this and if the client has not validated the DNSKEY within some set time period, the client needs to also validate the DNSKEY using the DS record stored at the parent zone. Each parent zone public key must also be validated in turn. Once the chain of trust is built and the signatures match, the DNS response can be considered to be validated and authentic.

DNSSEC and an fTLD Domain

To meet this requirement the zone, its parent zone, that zone’s parent zone, the fTLD Domain and the root of the DNS all must be signed. To tell if a zone is signed, all you need to do is see if it has a DNSKEY record. If it does, the good news is that it supports DNSSEC.

Fortunately, the root and fTLD Domain are already signed and have DNSKEY records. Suppose we want to sign example.bank—what would we need to do next?

Every time the zone changes (perhaps a new domain is added to the example.bank zone, or the key needs to be updated) the zone must be resigned and the publishing task must be completed again. The process used for replacing one key in a zone with another is called a key rollover.

Keys in the DNS have a limited lifetime for security reasons. However, for fTLD Domain customers it is important that the existing chain of trust is not broken when the key rollover takes place.

A key rollover takes place when the records generated with the newest private key are first introduced into the zone. The key pair is often generated well in advance and the public key may also have been made public well in advance. Both key-signing keys and zone-signing keys are routinely (usually on a scheduled basis) rolled over.

DNSSEC Deployment for Registrars and Registrants

In cases where the registrant outsources the management of their fTLD Domain zone, they must ensure that the third party is able to successfully generate keys, sign their zones, generate and upload the DS records and manage key rollovers. For organizations that choose to outsource the DNSSEC management activity, there are a variety of vendors with service offerings that will comply with the fTLD Domain DNSSEC requirement. Webhosting companies, registrars and DNS management services may have service offerings that can assist a registrant in complying with the DNSSEC requirement.

In cases where a registrant has decided to implement DNSSEC on their own servers, it is useful to have tools that will help key management, signing, publishing and rollover tasks. In addition to commercial
tools that are easily found using simple searches on the internet, there are two primary open source approaches available: